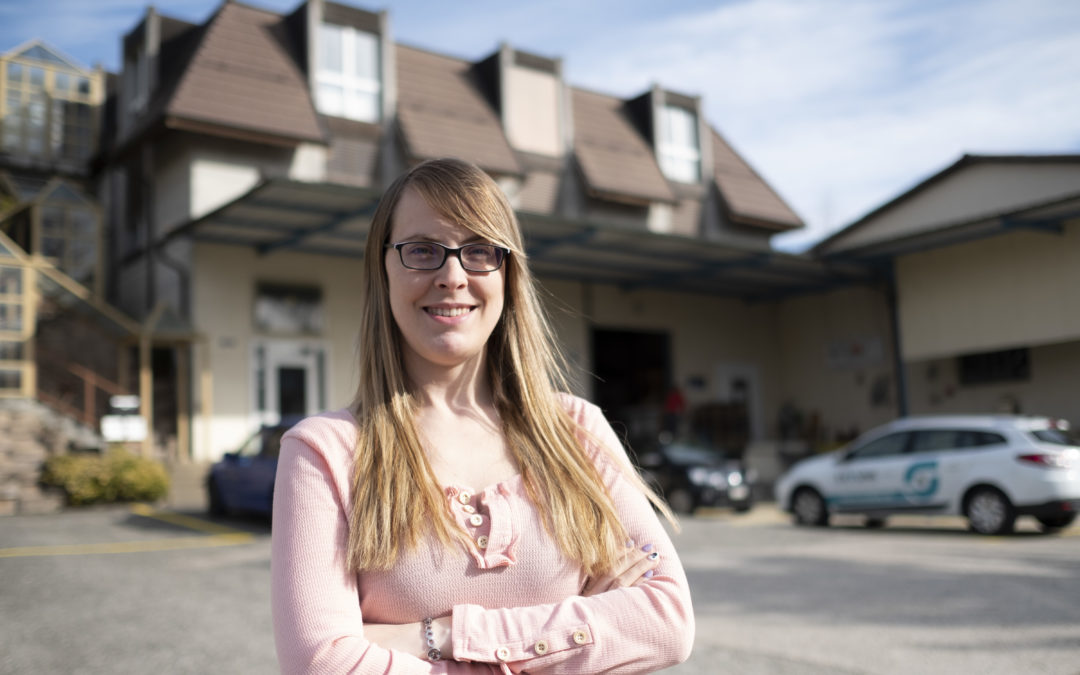 At its beginnings, computer programming is perceived as a women’s field and will be until the end of the 1960s. The first computer scientists learned to program as self-taught. Women’s activities in this area were not seen as important and programming was not seen to have economic value.

At that time, the whole economy revolved around the production of hardware where men were present.

The turning point was the birth of the software industry in the 1960s. Programming is becoming more prestigious because it can now produce economic value. This development leads to the establishment of the first computer training courses.

What about the place of women in this field nowadays ? Meeting with our telematicist Anaïs.

What is your professional background ?

After school, I started gymnasium which I stopped because it did not correspond to my aspirations. I went to the SeMo. This allowed me to get an apprenticeship in an architectural office as a building designer. Neverthless, I had to stop

In order to figure out where I was heading, I did a multitude of internships, working alongside Mc Donald. Thanks to these internships, I got a taste for electrical trades.

Then I started an electrician-installer internship. During that training, it did not go as well as I had hoped. At the end of this experience, I had no pleasure in this job anymore. However, I obtained my CFC and I had switched my speciality to telematics in two years. I wanted to to stay in the field while refining my technique.

Today, I am studying in parallel with my position at EvoLink in order to obtain my telematicist patent – project leader this summer.

Where do you get your taste for telecom and computer technology ?

I had no predisposition to choose a trade in those areas. Starting with electricity, I discovered that I liked the variety of the trade. Although my motivation was no longer there, I wanted to stay in the technical field that I like and correspond to.

The world of computing is a very masculine one. Did you encounter difficulties as a woman when you entered the labour market ?

Surprisingly not. Mentalities are more open than for the profession of electrician, I think. I get positive feedback more easily than negative feedback. Which is motivating !

The most improbable feedback I received were from women. Either they are suspicious of a technician or they are enthusiastic because « we understand each other better ».

You see a little bit of everything, but nothing nasty.

How do you view the fact that the computer industry is very little feminized ?

I must admit that I’m not shocked, having done four years of electricity, I was already used to being the only woman.

In your opinion, how to attract more women to technical training ?

I think, and I especially hope, that the things are building up to stop the division between “women’s and men’s job” will bear fruit. But mentalities are hard…

Apart from that, to show people over and over that, technology is not a man’s world, I don’t really know. At the end, it’s a job like any other, you need it for every taste. Young people need to know that there are endless possibilities for them, girls and boys, and they are free to do what they like next !

What would you like to say to girls and women who are still hesitant to choose this career path ?

Believe in yourself. Technique is like everything, just get on with it and everything becomes possible. Men are struggling just as much as we are, if not more. Women logic allows for a different approach and it often brings a plus.